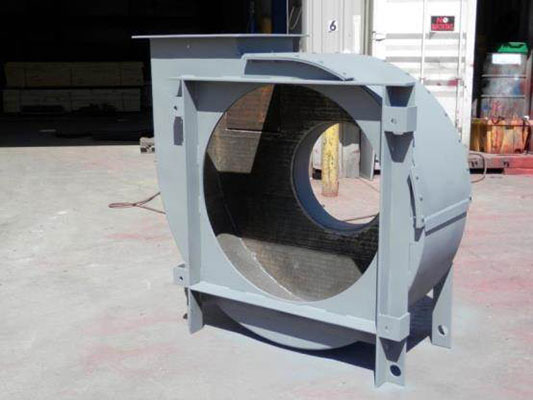 General information
Name of center
SSAB
Description of the case

Wear Life:  The original Fan Housing was fabricated from a AR plate that was lasting approximately 4 months with wear throughout the entire housing, the highest wear in the formed back and bottom.

Design: After studying wear patterns and consulting with the customer over several orders the latest re‐design

► Removed Mild Steel from the side structure. Sides are now made, not lined, from Duroxite® Plate.

► Added side inspection door with flush wear plate on interior.

By fabricating the sides of the housing from Duroxite® and not Mild Steel lined with CCO the overall weight of the fabrication has been reduced significantly. The addition of the inspection door with a flush wear plate on the interior has given the customer and inspection port without creating a wear area. The biggest improvement to the design is the formed / bolt on replaceable liner which allows the customer to replace the highest wear zone without replacing the entire fabrication. Continuous improvements to the design has increased the wear life from 4 months to approximately 2 years.